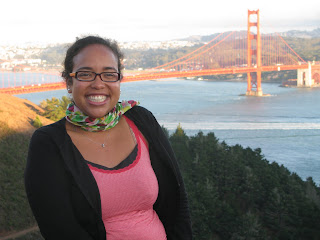 Not every dream job begins with a dream. Sara Stroman's did.

Mid-way through a trip across Europe in 2009, Sara was jolted awake in the middle of the night with an image of a pattern imprinted on her brain. In her dream, she saw herself opening an envelope with a card inside. On her way back home Sara began plotting how to get a stationery company off the ground and thus S2 Stationery and Design was born.

Looking back, the signs were all there. Her trip was part vacation, part tribute to her father who had recently passed away. At the beginning of her trip, Sara ran in the Rome Marathon which had the slogan "Start Your Dreams." During the last leg of her trip in France where her father was born, she grabbed a snack at the train station. It came in a bag that said "Le papier c'est la vie" which translates to "Paper is Life." She says it felt as if her father was showing her the way to her future purpose.

Her mother  knew right away (like all mothers do) that she was on the right path, reminding Sara of how she loved working at a stationery store in high school and had collected wrapping paper to pin on her bedroom wall. Sara's passion for "getting it right" and a constant desire to learn more, do more, has propelled her from making cards for friends to opening an Etsy shop and designing custom cards for wedding, birthday parties, and simply saying hello.

If Sara has an identifiable design ethos, it's to stay out of the way. Her designs are minimal, so that the sender feels like the card is made for him or her, and can be used for different occasions. Sara says that the beauty behind receiving a card in the mail is in reading the words from the other person, and she doesn't want her designs to interfere in that communication. In an ideal world she would be able to teach everyone how to write and communicate how they feel through a social network built the old-fashioned way, around paper and pen and ink. As tangible objects, people take more care with what and how they say in letters. For Sara, a world with a bit more genuine emotional contact is worth dedicating time to.

You'll find S2 Stationery and Design at the Prospect Park Bandshell and Celebrate Brooklyn this summer.

What is your idea of perfect happiness?

Perfect happiness is peace within. I'm a bit of a free spirit and I know that involves having a sense of peace within that allows me to continue to move freely. I love to travel, meet people, tell stories, and learn. The moments when I am unhappy are moments when I feel like I can't do those things. Many times when I feel restricted it is because I can't attain those things. I realize it is a result of mental roadblocks which is when finding that sense of peace can really make the difference and help me move beyond.

What is your greatest fear?
I have two: sounding dumb and getting stabbed.

Which historical figure do you most identify with?
None that I know of; I've only ever identified with myself.

Which living person do you most admire?
My 17-year-old brother, Travis. I know that seems odd, but he's got a great head on his shoulders. He has a great sense of humor, is smart and philosophical, kids love him, and considering that he's dealt with a lot more than my other brother and I growing up, he's quite mature for his age. Rather than seeking out trouble he's stayed on course and knows what he wants to do. Not only do I admire him, I'm so proud of him.

Do you have a theme song, and what is it?
Yes, Several! But I'd say it's hands down Gypsy by Fleetwood Mac, although sometimes I think it's also American Girl by Tom Petty.

What is the trait you most like in yourself?
That I am an open person. I'm open to experiences big and small, which in turn leads me to amazing adventures, people and boundless inspiration.

What is your greatest extravagance?
Food! I've become an active member in the food movement and so I spend my money on food from Whole Foods and farmers markets. Yes, more expensive, but I value my body, the planet and the work of a farmer that truly cares about his land, animals, and product.

When and where were you happiest?
I'd say the years between 11 and 17 which were spent in Cleveland Heights, Ohio. My family moved there in 1992 from Brooklyn and I loved the time I spent there and the friends I made there. It was a good period in my life.

If you could change one thing about yourself, what would it be?
That I get emotionally attached to things that I probably shouldn't. I'm a passionate person in general and I never want to lose that passion, but I wouldn't mind stepping away from some of the attachment that I place on things.

What do you consider your greatest achievement?
Completing my first marathon. I had always hated running and yet there I was in Anchorage, Alaska after months of training, with two sore ankles (they rolled at various points during the race), trying to run/walk 26.2 miles. It was both devastating fulfilling. I didn't run like I wanted to, but I finished the race despite the soreness and disappointment.

If you were to be reincarnated as a person, animal, or thing, what do you think you would be?
A ladybug.

What is your most treasured possession?
A locket of hair from my grandmother. She gave it to me while she was undergoing chemotherapy years ago. I still have it with her note, 19 years after she passed away.

Which talent or skill would you most like to have?
I'd love to have the talent Tabitha had in Bewitched where she'd wrinkle her nose and things would get done. That would solve a lot of my time issues, especially when it comes to making dinner or doing laundry when I have a big stationery order to work on.

Who are your heroes in real life?
My grandparents. My mother's parents because they both came to America from Honduras, worked jobs in factories, never learned English, but bought a house and took care of their children. I don't have a life nearly as hard as theirs and I remember how hard they worked to have what they could and did have.  My father's parents because they were an interracial couple in the 40's and 50's. They met in France while my grandfather, an African American army soldier, was stationed there. They had my dad in 1956 and moved to New York two years later. Racism was more rampant then and my grandmother was a feisty little thing who loved my grandfather and didn't take anything from anyone.

What is it the one thing you dislike the most?
Lying.

What is your motto?
"And if the thing that drives you onward is your heart, you must not let that engine die." I can't take credit for the motto because it comes from song lyrics by Jesse Elliott of the band These United States. But, when I heard the song it comes from, "When You're Traveling at the Speed of Light," I was hooked. I designed/made my first batch of thank you cards (with permission of Jesse) with those on the front and it's been one of my favorite sentences ever since.

Who are your favorite artists?
Any artist who blazes a path and believes in it including the amazing musicians, writers, sculptors, painters, fashion designers out there now. Right now, Jesse Elliott, of These United States, is one of my favorite artists. I am also awed constantly by the works of Marc Chagall, Pablo Picasso, Joan Miro, Alexander Calder, Henri de Toulouse Lautrec, John Singer Sargent, and Amedeo Modigliani. Those are my absolute favorites. They stop me in my tracks and make me thankful that I can see their talent and beauty. I am also always inspired by indigenous art, including jewelry, architecture and textiles. When I was a child, I was obsessed with the art of Native Americans including tepees and moccasins.

Is there any invention you wish you had thought of?
The scissor. Seriously. I carry at least three pairs on me every day.

What's the first thing you remember making?
The apartment I lived in in Brooklyn had linoleum floors and I would lay stomach down with a box of crayons and white paper and color the patterns of the flooring onto the paper in different colors. I never got tired of doing it, though I try to describe it to people now and they think I'm crazy, but I'm not! 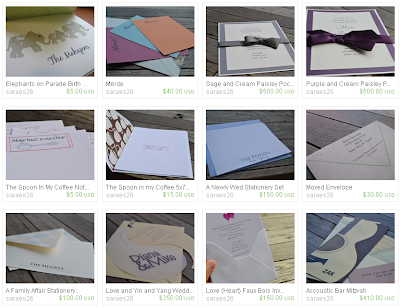 Sue De
etsy.com/shop/persuede
made for you
Posted by Unknown at 6:26 AM

So much fun to read, Sara's amazing!