After recently watching Ken Burn's documentary on The Dust Bowl years (I'm from Nebraska; everybody on this program spoke exactly like my Grandma), I was struck by many things; one of those things, in its bitter sweetness, was how the women of these truly, unfathomably desperate years, so poor from the drought and The Depression that they couldn't afford food, women who spent their days living with soot and dust blacking out the sky more days than not, for years, with it drifting feet high into their homes and filling up their lungs, killing their children, somehow found ways to not only go on, but to maintain some kind of hope and normalcy through creativity, skill, perseverance and sheer will. In one particular section of the documentary, the film talked about how, because the parents had little money to feed their kids, let alone for material to make the clothes that the children needed for their growing bodies, the women in the family used their hard-earned resourcefulness and creativity to use what they could to get by. In this case, they re-purposed old flour sacks into clothing for their children so that the kids could maintain some minimum amount of dignity, go to school and be protected as best they could from the elements. The kids, with flour sack dresses and cardboard shoring up the soles of old worn-out shoes, were singled out for what they wore, and yet they had endured so much more for so long, even as little tiny children, that this became just one more thing. At tender young ages they laughed about it, moving through fear, anger, despair on to acceptance. They laughed at their lot and luck because, at that point, that's all there is.

The manufacturers of these flour sacks caught wind of what was going on. In reaction, they actually began to print pretty flower and plaid patterns on the sacks solely because they knew these poor farm women, the backbone of the breadbasket of America at that time, were using them for this purpose. It was a small, tacit acknowledgement, a reinforcing of dignity and kindness. This seemed, to me, as I was watching, representative of the tremendous power and light and life of people, who to this day, use their own hands make things that are beautiful and useful and nourishing to the people in their life.

That said, I highly, highly recommend this Ken Burns documentary and his other about Prohibition; there is so much to learn about what an important role women played throughout the making and enduring of America in the early 20th century. Many of us here on Etsy are the beneficiaries of these women; the traditional skills we use today as well as the internal and creative fortitude forged by these domestic fore-mothers. We have taken these skills, learned them, kept them alive, modernized them, and taken them to new levels. What once was seen as less than art and common, unsung, private and domestic is now elevated to the highest levels, fully incorporated, powerful and public.

And on that note, I poked around and found some of our fellow makers who have kept the flour sack tradition alive in particular. Here are a few pictures of their endeavors mixed in with some originals... 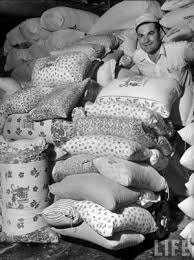 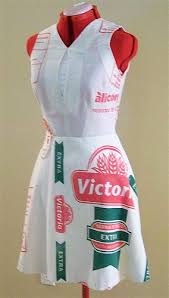 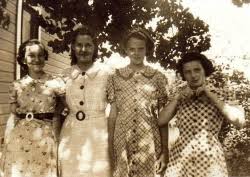 Thanks, everybody. It seems these days, maybe we are all very lucky, even in our bad luck! :)

Up until the 70's my mother bought 25 lb. bags of flour at the grocery store that came in pretty fabric bags. She would undo the stitching, rinse the fabric then hem the edges, wash it, then we'd use them as dishtowels. They still are my favorite towels. I grew up in San Diego, my mom grew up in Salt Lake City.

Wow, that is such an interesting story. Thanks for sharing