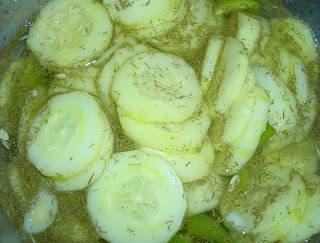 I will admit that I have a serious love affair with cucumbers. I use pureed cucumbers in my cucumber & aloe soap. I also try to eat lots of salads during the summer, and they would not be complete without some cucumbers! I get so excited when spring/summer comes around because they are in season and reasonably priced at the supermarket.

Unfortunately, cucumbers don’t have the best shelf life, and they would often go bad before I could eat them. I found a simple recipe for pickled cucumbers that will keep for at least 3 weeks in the fridge, so now I can load up on cucumbers when they are on sale!

Peel & slice the cucumbers, onion, and sweet pepper. Place in a bowl with a tight fitting lid.

Bring the water and vinegar to a boil in a saucepan. Add the sugar & stir until completely dissolved.

Place the cover on the bowl and shake. Let the cucumbers chill in the fridge overnight, and enjoy the next day!

-Nordea
Nordea's Soaperie
Posted by Yours truly at 9:33 AM

So refreshing and easy to do. Can't wait to try it.

Thanks for the recipe! Perfect for summer meals.