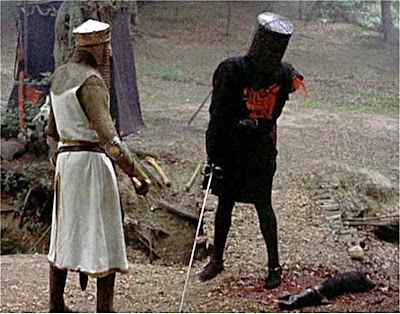 "T'is but a scratch"
Having shown his warlike tastes by spending his previous Halloweens as a ninja, a War of 1812 ship captain and a Revolutionary War drummer boy, my son decided he would be something humorous last year - the black knight from Monty Python and the Holy Grail. That was the character in the rather bloody scene where King Arthur discovers his path blocked by a knight who refuses to stop fighting even after all his limbs are cut off. I figured with black jeans, a belt, and a black hooded sweatshirt, this wouldn't take too long to make. I already had a nice big Lord of the Rings plastic greatsword for him to use while he still had his arms, so all he was really going to need was a surcote and a helm after I convinced him he was not going wear one of my real helms from my days in the Society for Creative Anachronism. 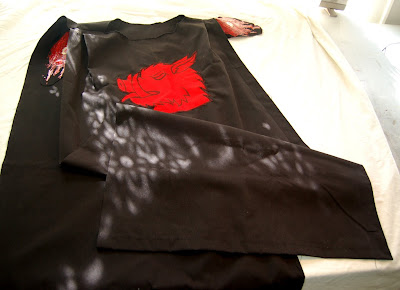 Sew the shoulders of the black fabric together, leaving a nice wide openning for the head and neck. I also sewed a pleat on either shoulder, so the surcote wouldn't hang over my son's arms too much. I cut out two triangular flaps and my son painted the bloody stumps, which turned out well and as his friends remarked admiringly, "Really gross." It took a day to dry, and then I also brushed it with some acrylic gloss. These flaps I sewed underneath the shoulders, so my son could tuck them in or out, depending on when he wished to be armless. 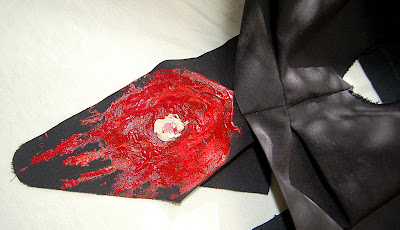 I screen captured the boar on the chest of the black knight's surcote and hand drew it onto the red fabric. Any one could enlarge the picture below instead. I then cut it out, sprayed the back with the fabric adhesive and machine appliqued it to the front. 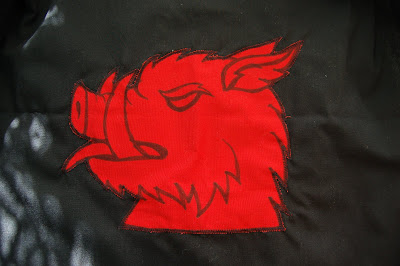 The helm was made with 3 pieces of black craft foam. The back piece measured 12" wide by 8.5" high. 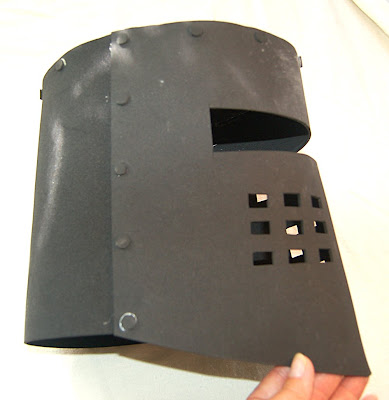 The front piece was 14" wide and came to a point below the chin at 10.25", while it was 8.5 at the sides. I marked the eye and air slits from the back and cut them out with the x-acto blade and a ruler. 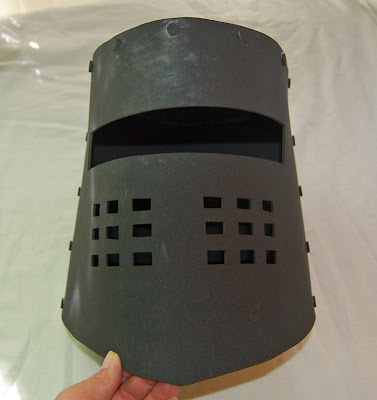 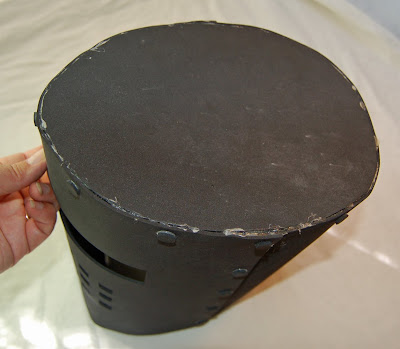 I used masking tape to hold the parts together and then made things a lot more permanent with a glue gun. I also cut little circles of foam to be the rivets. I was going to spray it silver but my son liked it the way it was, & so it was done. A nice light helm, good for running about in at school and while trick or treating.
"NONE SHALL PASS!" 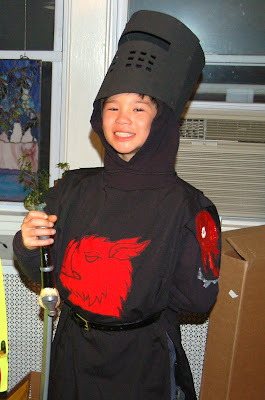 Jody
a Studio by the Sea

This is fantastic! He has great taste in movies :)

OMG I LOVE THIS!

Wow! What a great costume!

Wow, that's fabulous! Thanks so much for sharing the details, I'll be linking to this.

Hey, this really helped. Our family is going as Monte Python Holy Grail characters this year. Your info helped me make our son's Black Knight helmet. Thanks!

There are so many things about Halloween which I didnt know! Check how much you know!!

I'm using this as inspiration for building a puppet!

Brilliant! Thank you for the tutorial. I think my husband may dress up as the Black Knight this year, so this helps so much. And your son is awesome!