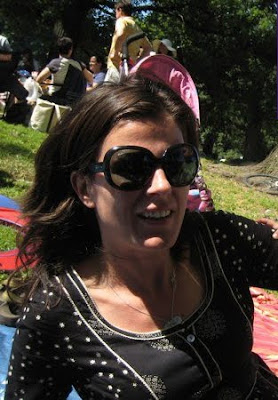 Leslie Astor of AstorKnot has been crafting and making for as long as she can remember. A ceramist and graphic designer by training, she strives to look at the everyday in fresh and new ways. "I was terrible at [graphic design] but studied it thinking it was a practical skill to acquire," Leslie confesses. "And I don’t regret having done it because I do think it informs a lot of the work I do now in terms of creating compositions with text and image." She goes on to quote Emerson: “If the stars should appear one night every thousand years, how man would marvel and stare.” In that vein, she looks at something ordinary we see everyday, like a bunch of carrots, and strives to illustrate them as if they are something rare and beautiful.

A full-time mom, Leslie loves crafting with her children. Together they've made everything from Christmas ornaments to glittery decoupaged Easter eggs. Recently, she taught her seven-year-old son how to embroider. Next, Leslie hopes to tackle printmaking as a family project, and recommends Amanda Blake Soule’s book “The Creative Family” as full of great ideas for spending creative time with kids.

For all of the time spent crafting with her family, Leslie also appreciates that running a craft-based business, and pursuing the different outlets it gives her imagination, provides her with space to develop and grow creatively. You can see the results in her Etsy shop, or in person at Urban Alchemist in Park Slope, which carries the AstorKnot line of bags.

What is your idea of perfect happiness?
Around the dinner table with my husband and my three children, eating a healthy meal I have lovingly prepared, where no one is standing, shouting, throwing food or making potty jokes. This actually does happen once in a blue moon.

What is your greatest fear?
Losing my family.

Which historical figure do you most identify with?
Eva Hesse, who struggled to come to terms with and integrate her various identities as a woman, wife and artist.

Which living person do you most admire?
Nelson Mandela.

Do you have a theme song, and what is it?
I don’t, but back in high school it was the ZZ Top song “Legs” which was the nickname the captain of my soccer team gave me. It stuck, though no one has called me that in quite a long time!


What is the trait you most like in yourself?
Being able to show up for my family and friends when they need me.

What is the trait you most like in others?
Empathy, and an excellent sense of humor. I know, that’s two.

What is your greatest extravagance?
Expensive jeans.

When and where were you happiest?
Most recently in Northampton, Massachusetts sledding down a hill with Henry, Jake, Charlie, and Michael.

If you could change one thing about yourself, what would it be?
Someday, when I get around to it, I’m going to stop procrastinating.

What do you consider your greatest achievement?
Being able to juggle, albeit very imperfectly, a creative business and raising children.

If you were to be reincarnated as a person, animal, or thing, what do you think you would be?
I hope I get to keep coming around as an artist in one form or another.

What is your most treasured possession?
A hand stitched quilt that my great grandmother made.

Which talent or skill would you most like to have?
A beautiful singing voice.

Who are your heroes in real life?
My mother, who raised five children on her own, and every other single mother out there.

What is it the one thing you dislike the most?
Fear-based intolerance.

What is your motto?
You get what you get and you don’t get upset.

Is there any invention you wish you had thought of?
Silly Bandz.

What's the first thing you remember making?
I clearly remember my first day of kindergarten: walking into the room, straight up to the easel, and painting. 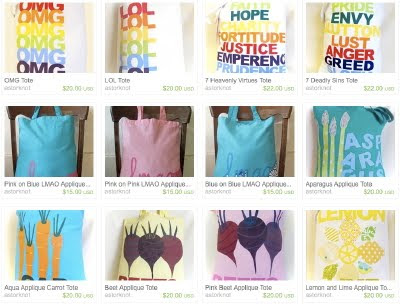 In addition to AstorKnot, Leslie maintains a dedicated Facebook page, called Astor Knot Design, where subscribers can get updates and info.

As far as nicknames go, that one is pretty good!